Back last spring, I came to the realization that most of the people I enjoyed playing Secondlife with no longer played.  Some intermittently still came on, but I found myself tuning out SecondLife while playing other games.

Other than occasionally talking to Justin about music or comics, there were very few people to talk to normally anymore, and it was getting worse.  I started thinking about leaving then but resisted because I was stubborn.

Secondlife became a place where you could log in and hear somebody have a breakdown or watch relationships fall apart in a loud and public way.

For four or five years now, Secondlife became a weirdly competitive platform where people were unbelievably horrible to each other.  My strategy became being more terrible than whoever was awful to my friends.  Unfortunately, I got pretty good at that.

Battling pretty bad people by being worse became how almost everyone played SecondLife.  Gone were the avenues for creativity in the world of SecondLife.  You could visit some pretty cool builds, but most paled to anything done in Unreal Engine.

By May, I became pretty determined to dramatically reduce my time on Secondlife; by June, I was logging in once or twice a week, and by July, I was gone.

It was the right decision.  SecondLife makes you petty and mean if you're around it enough.  Even if you escape that, you're still going to witness good people suffer and break down, and there's nothing you can do to stop it.  Honestly, I wish I'd given it up three or four years ago.  The things I've witnessed in those years were not pleasant.  SecondLife became dominated by miserable people, making me unhappy too.

I still care about a few people in the game, but I can care about them without being in SecondLife.  It's impossible to shield them from the toxicity dominating the game, but it's their choice to be in it.  I'm choosing not to.

You People Are Addicts

So, my blog has been gone for weeks now and there are still 100 to 200 people a day that check this web address to see if anything has changed.

Not a goddamn thing has changed...

Secondlife is dying and these people are trapped in a repetitive downward cycle of nothingness.

If you're curious about the Britbong saga, check Twitter and Youtube.  It's heating up but I just don't care because it really is just more of the same.

Look, if you've been using Secondlife as some sort of real-life reality show, the show's over.  It jumped the shark maybe a year and a half ago and now they're just waiting for the contracts to run out.

Since disgraced former DJ Stefanos spent weeks reporting my blog trying to get it taken down I thought I'd save him the trouble and shut it down.

I've been talking with my friends about this for a couple months now, and it's time.  Truth be told, it's been a long time since the blog was either fun to write or read.  What's left of the community I once wrote about now hangs out a couple dozen at a time in empty fields or roadsides waiting for Linden Lab to turn the voice off there too.

What we had isn't coming back and writing about the death of our community hasn't been much fun.

The Britbong thing was fun when we'd say he lied about Ralph Pootawn and he'd get upset, but the shit that happens with him now is gross and shocking and I want no part of it.  Maybe discord or law enforcement or somebody can sort it out but I'm just going to watch from a distance.

I'm told that several people have archives of the blog and plan to re-upload it.  Please at least let me know before you do that.  Honestly, it's not worth it.

So, thanks for all the fish guys.  Maybe one day I'll come back, but don't hold your breath.

This January, we celebrate the tenth year of Operation Harrison Pigface, the troll that ended the musical career of Harrison Digfoot in Secondlife.

You can read my original account of the event here 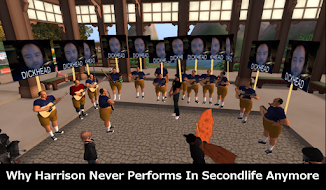 I want to say the Chapel organized the troll, but it might have been Celeste.  I know I was there, Starr, Jider, Damnright, Chapel, and Nym.  As you can tell from the photo there were plenty more.  The one guy not in a Harrison Digfoot avatar is Socrates who was too drunk to figure out how.

I can't remember why I didn't mention the girl's screen name in the original article.  Maybe she asked me to or something.  Either way, I won't here either.

There was a pretty good video of it, but it's long-since gone.  I want to say it was on Crunk's channel. 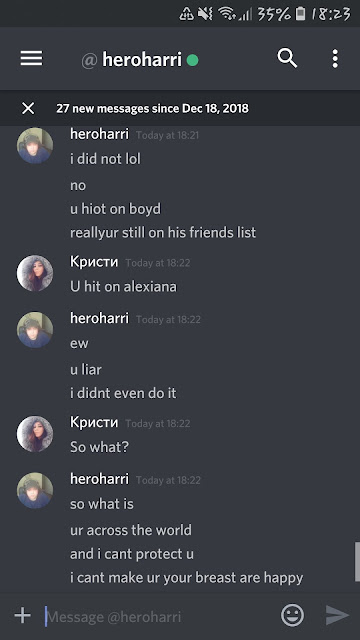 The True History Of The Clown House 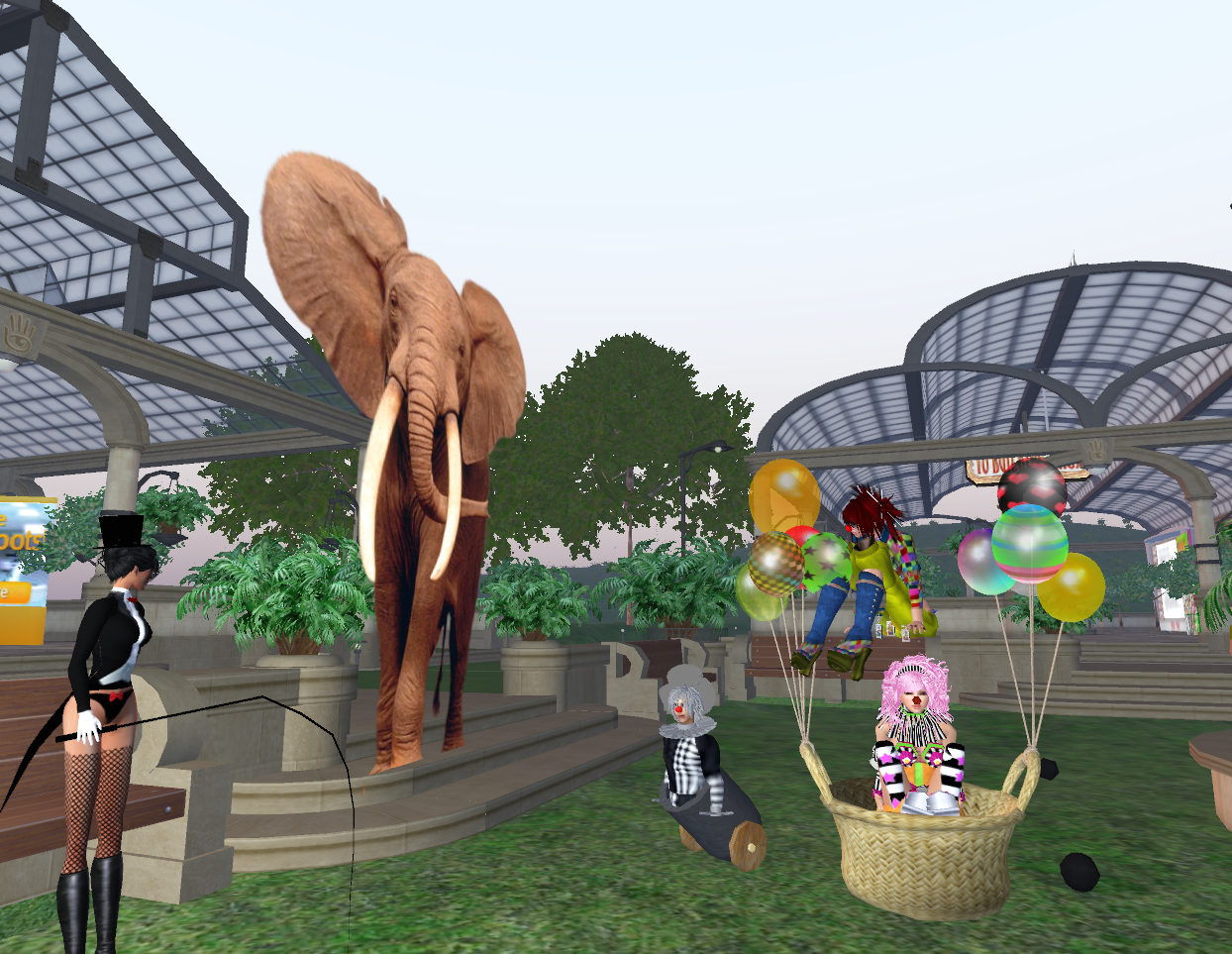 Back in the old days, when Secondlife was still pretty cool, people were very excited about the idea of making 3D objects you could interact with (myself included)

I hung out at a place called "hanja" which was one of the older info hubs.

One day, teleports couldn't work in Secondlife, and I was bored, so I tried my hand at making a "skin" for my avatar.  I did it by taking a copybot skin and painting a clown face on top of it.  I didn't think much of it at the time but it became stupid popular.  So much that my friends began making a costume to go with the skin.  I ended up stuck wearing that skin for a little over a year because people kept giving me stuff for it.

One day, in Hanja, some of the other residents thought it might be fun to put on what circus themed things they had and the idea was born to have a Circus Party.  I had land, so I offered to host it.   I had been building a house on the land to help me learn how to make things in Secondlife, so I copied it and replaced it with the copy.  I then began putting clown themed textures on the walls and floors and changed the windows to eyes so that the whole house looked like a face.  This was for the party. We had the party, and though she talks about it a lot CheChe143 Gothly was not invited and never saw it.  (that might be part of why she was mad) I don't have any photos of the "clown house" but I do have a couple of the pre-party in Hanja. The party was fun.  I had a cannon that shot people across the sim and other dumb stuff.

The Clown House itself existed only for that night though and once the party was over, it was put away and replaced by the more normal one, never to be seen again.

So, remember, if you hear people talking about seeing the clown house or anything that happened there, unless they were a hanja insider THEY'RE JUST LYING.

Two structures I did make that lasted a long time was a 1:1 scale version of the Empire State building, which was so tall most people didn't have their draw distance set high enough to see the top (which was the best part)

I also made a semi-animated Art Deco Robot based on Sky Captain and the World of Tomorrow, which guarded over the entrance to Blake Sea for many years.  It's hard for some people to believe that there was ever anything cool enough about secondlife to be excited about making this for it, but you have to remember this was 12 years ago.  Half-Life 2 hadn't even been released yet, and Secondlife was actually cutting edge. 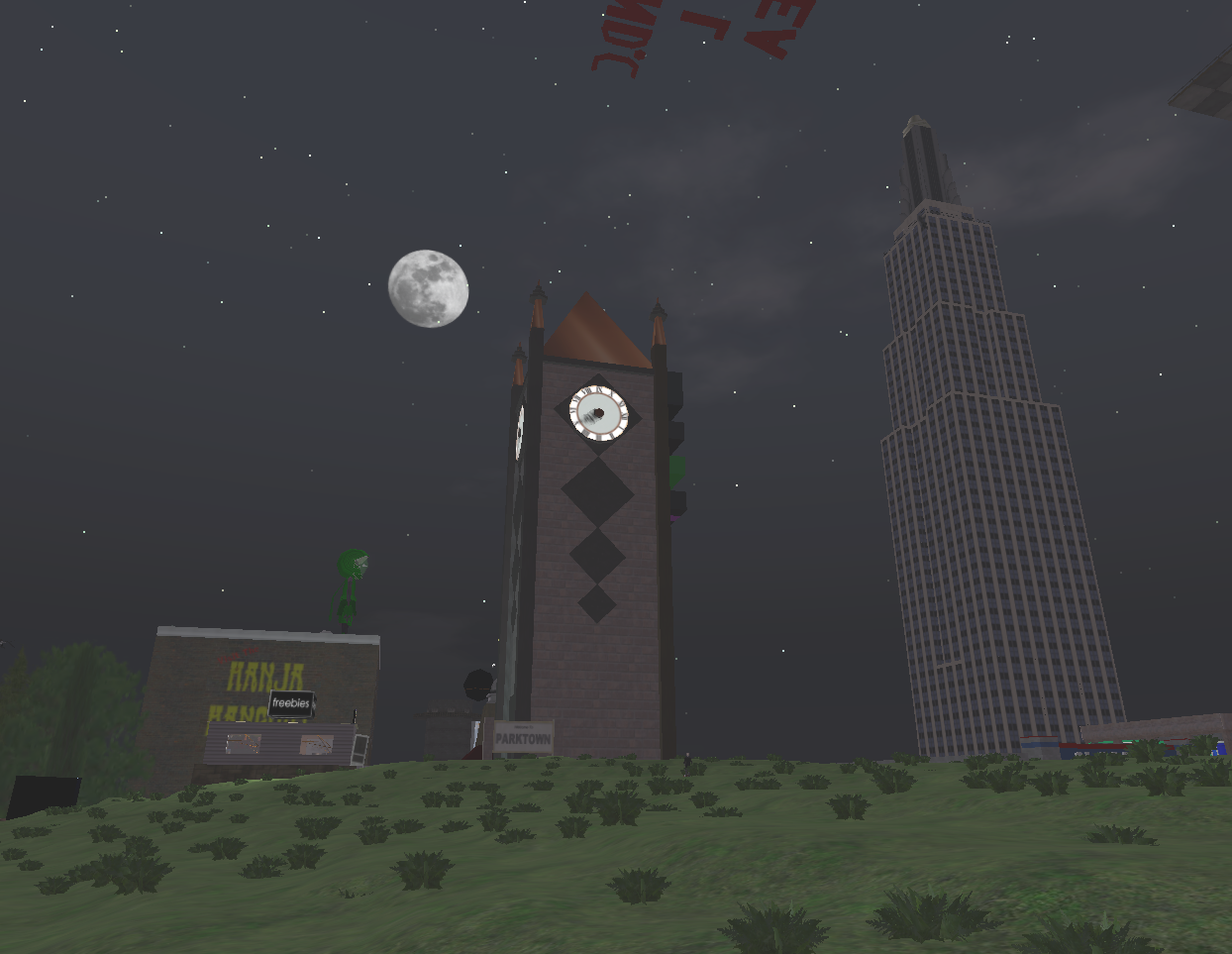 My 3rd (and last) Casino The Day Before Opening


About a year after this last version of Parktown games opened, Linden Lab changed the rules on gambling in on mainland in Secondlife and the whole deal came to an end.  It looks kind of like minecraft now, but at the time it was pretty impressive. 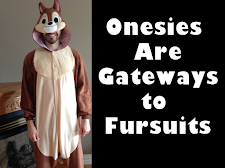